LIFESTYLE OR SPORT? WHAT SKATEBOARDING MEANS TO THOSE WHO LOVE IT

This weekend, as the delayed 2020 Summer Olympics get started in Tokyo, you may be surprised to find a couple of new additions to the competition. For the first time in the event’s 125 year history, sports such as karate, surfing, and baseball have been included, along with one that has raised a few eyebrows. With separate competitions for park and street skating happening, some people have questioned, “is skateboarding a sport?”

Skateboarding was born out of the surfing community in California and Hawaii in the 1950s, with enthusiasts looking to replicate the feeling of riding waves on days when the swell was too gentle. Within a decade, commercially produced skateboards were being sold, followed by the first skate competition at Hermosa Beach, California, in 1963.

While skateboarding spread across the globe, growing not just as a culture but also as an industry with big-name competitions, it never entered the mainstream. Skateboarding’s counter-cultural vibe meant that historically the sports world rarely took it seriously – a fact that didn’t bother most skaters who looked to it more as a lifestyle.

So, as it enters a new era as an official Olympic sport, how does the skateboarding community feel about this recognition? We spoke to two skateboarders for their perspectives on the sport vs. lifestyle debate, how they got started and how important the community is to them.

Based in Helsinki, Finland, 29-year-old Tommi has been skating for around twenty years.

WHAT SPARKED YOUR INTEREST IN SKATEBOARDING?

It was a combination of two things:

2) the first Tony Hawk video game coming out around the same time.

Seeing it live and playing the game as a kid made me want to learn skating. ‘Monkey see, monkey do’.

FOR YOU, IS SKATEBOARDING A SPORT OR A LIFESTYLE?

But since there’s no rulebook for how you should skate or where you can do it, that’s a big difference from sports. It leaves a huge room for imagination.

Skateboarding allows you to keep playing, even if you’re not a kid anymore.

«Skateboarding allows you to keep playing, even if you’re not a kid anymore»

DO YOU DO ANY OTHER SPORTS OR EXERCISES THAT YOU FEEL COMPLEMENT YOUR SKATEBOARDING?

Occasional running, biking, and, in the winter, ice hockey with the beanies on. Lots of ice swimming too, usually with a good amount of sauna before and after the dip.

HOW DOES IT FEEL TO HAVE SKATEBOARDING BECOME AN OFFICIAL OLYMPIC SPORT?

Well, personally I didn’t grow up viewing skateboarding as a sport at all! So it’s weird and funny at the same time.

To me, it kinda feels like somebody outside of skateboarding is arranging a skateboarding contest. But I don’t think it’s worth wasting your energy hating on it. It’s just an extension of competitive skating that some people are drawn into.

I think skating and contests work the best together when it’s not too serious. Prime examples would be the Dime Glory Challenges and CPH Open. I feel they’re events where skateboarding is celebrated rather than judged.

WHERE IS YOUR FAVORITE PLACE FOR SKATEBOARDING?

Maybe San Francisco for its hills.

New York is basically a big skatepark; there are so many spots.

The architecture in Copenhagen seems like it’s made for skateboarding, and you can get around easily with bikes.

«The architecture in Copenhagen seems like it’s made for skateboarding»

YOU’VE COMPETED IN VARIOUS CONTESTS AROUND THE GLOBE. HAVE YOU NOTICED MORE WOMEN PARTICIPATING IN SKATING OVER THE YEARS?

Yeah, I think there was a big shift about 5 years ago. A lot of girls started, and more importantly, kept skating. Not just in Finland or in the Nordics – worldwide, it’s been gradually growing in the last few years.

The big difference, I’d say, is skateboarding companies not being as afraid of welcoming female skaters into their teams. Nowadays, we are starting to see big shoe companies giving colorways and signature models to their female riders. I really hope we keep moving toward more equality and acceptance. Skating should be genre-free.

WHAT WOULD BE YOUR TIPS FOR A BEGINNER?

It’s usually a good idea to get a board from a real skate shop. After that, be patient and have fun with it. You can do so many things if you’re not afraid to be laughed at.

Based in Nottingham, England, 28-year-old Tenika has been skating for around three years. 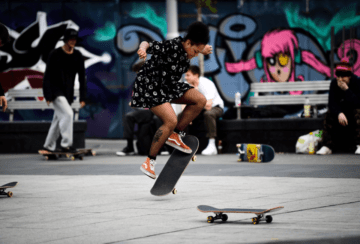 HOW DID YOU GET STARTED IN SKATEBOARDING?

I got into skateboarding through my close friends. I used to go with them to Flo, an indoor skatepark here in Nottingham, but they’d always skate off while I would just hang around. So, I decided to give it a try myself. I was pretty wobbly, to begin with, but after a few attempts, one of my friends gave me an old deck of theirs.

I started improving after going to the women and girls skateboarding session at Flo once a month. As a new skater, I liked the environment and the lack of pressure on these nights as the skatepark wasn’t as male-dominated as usual.

I’m working on my Fakie Bigspin at the moment, and it’s pretty tricky and scary. But once I get it, it’s going to look really cool.

«I’m working on my Fakie Bigspin at the moment, and it’s pretty tricky and scary»

DO YOU HAVE ANY SKATEBOARDING HEROES?

My number one favorite is Beatrice Domond. She’s from Miami, and she’s amazing. So humble and a really rad street skater. She does photography too and has released photo books. Her style is one that I really love – such an awesome person.

I also love watching all the Definitely a lifestyle. The community aspect is an enormous part of it. There’s way more to it than being on your board, such as seeing your friends or meeting new ones. You end up building these great bonds with people from all over that don’t just stop at the skate park.old skate videos from the late 90s/early 00s. The hip-hop meets skateboarding style. There’s something about it. You can just tell that everyone’s having fun.

FOR YOU, IS SKATEBOARDING A SPORT OR A LIFESTYLE?

WHERE IS YOUR FAVORITE PLACE FOR SKATEBOARDING?

Honestly, Nottingham has got to be my favorite place to skate – but obviously, I’m biased as it’s my home.

Otherwise, my favorite places to skate are the DIY ones made by skaters. These are the most fun as they’re always a bit more challenging and with character. I like that they are usually a bit sketchy and in some random location.

DO YOU DO ANY OTHER SPORTS OR EXERCISES THAT YOU FEEL COMPLEMENT YOUR SKATEBOARDING?

It’s hard to commit to any other sports because skating is what I do the most. However, I do a bit of yoga, and I used to swim quite a lot.

Both of these exercises enhance your core balance, which helps when you’re on the board. Plus, they also condition your body to be strong and healthy, so you can skate for long periods of time and take slams better.

HOW DOES IT FEEL TO HAVE SKATEBOARDING BECOME AN OFFICIAL OLYMPIC SPORT?

I feel 50/50 about skating being in the Olympics this year. On the one hand, skating used to be looked down upon, so it is amazing for it to be seen as a serious sport that takes so much training. But on the flip side, this could also end up changing it, commercializing it, making it feel less special. There are always pros and cons to everything.

«Skating used to be looked down upon, so it is amazing for it to be seen as a serious sport that takes so much training»

DO YOU FEEL THE SKATEBOARDING COMMUNITY IS WELCOMING TO WOMEN?

I think it is, to a certain degree. Locally, yes. Women are welcomed up here in Nottingham. You still get some guys who don’t like female skaters, but that happens everywhere.

Commercially, there is still a long way to go. Instagram has been good for showcasing more diversity in skating, but brands still need to catch up. Like football, skateboarding has traditionally been seen as a sport for men – but things are changing.

«Like football, skateboarding has traditionally been seen as a sport for men – but things are changing»

I’ve been skating for about three years, but I’ve spoken to some of my male friends who have been skating longer about this change. There were rarely any women doing it when they were younger, but there have been way more female skaters in the past five years.

WHAT WOULD BE YOUR TIPS FOR A BEGINNER?

I recommend checking out what you’ve got locally, such as an indoor park with sessions for beginners. There, you’ll probably have coaches who can give you one-on-one training, plus you’ll gain confidence as you learn alongside people who are on the same level. You’ll also meet friends for life.

«Just get on the board and try»

Or, you can just get on the board and try.